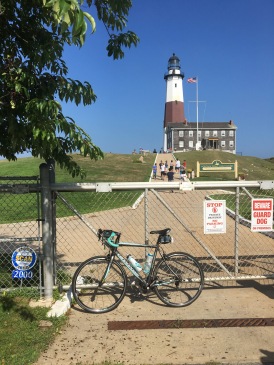 We met at 7am for a 7:30 start and is was already about 85f with high humidity.  The beginning and end were to be the same temperature but it would be in the 90s in the middle of the ride. In the first 15 miles one of the long time members had a blown tire.  His wife agreed to pick him up so he could change the tire and be dropped off at the deli stop and continue on with us from there. Two other members arranged to meet us at that stop as well.

The deli stop was in Yaphank at 35 miles into the ride, which was 45 miles into it this past weekend.  We met up with the other three members at the deli that we normally stop at on our annual ride.  I didn’t see it this past weekend.  We had a bite to eat, refilled our bottles, and took some pics.  After the deli, everything was very pretty.  From that point on, the rest of the ride was very scenic.

We maintained a very good pace.  We stopped again around mile 50 for more water at a gas station.  By then the temps were in the 90s.  I sat inside an outdoor freezer that stored bags of ice.  It was very refreshing.  A few miles after that we stopped at the big duck to take pics.  I didn’t take any pics as I was grumpy from the early stages of heat exhaustion.

We continued on and made the turn onto the next road and waited to regroup in the shade.  I laid on the ground after having some of my energy drink, a gel, and a cliff bar.  My skin was hot and my face was red.  Once we regrouped we were informed that one of the members wouldn’t be continuing on with us.  He was being picked up by our friend’s wife and would keep her company in the support car.  I tried to get up but both of my thighs cramped on the inside.  I sat there for a bit and drank more of my energy drink.  The guys offered to call the support car but I politely refused.  I had this.

After a few minutes I was able to get up without cramping.  We were about to start riding again and the guy who always babysits those in need positioned himself in front of me and paced me well.  He always knows what to do.  The guys really didn’t know what to expect.  They later explained to me that most people are done once they start to cramp.  The lunch stop was about 15 miles from that point.  We stopped about 10 miles before the lunch stop to fill our bottles and use the restroom at a gas station.

When we got to the lunch stop a friend of ours was there to greet us and he said the best thing I ever heard.  He said “I have cold water”. He and his wife also brought fresh fruit for us.  We had our lunch, used the bathroom, and said our goodbyes.  We would see them again at the end of the ride. We had 30 miles until we got to the lighthouse.  What’s funny is that he didn’t get a ticket when he was pulled over at the lighthouse for missing a stop sign.  It was unintentional.  I’m pretty sure it’s because he’s a genuinely nice guy.

When I reached the lighthouse there was one other person there.  The two people that were with him didn’t go all the way to the lighthouse.  They stopped in town for a burger and a beer before they caught their train back.  I said goodbye to them in town a few miles before the lighthouse.  We took some pics and cheered the rest of the group as they came in.  We had cars close by, and after they were retrieved, we piled in and went to the state park to shower before dinner.

It was a great day with a nice tailwind but it was way too hot to do a ride like that.  Since then I try to avoid hard rides when it’s uncomfortably hot.  I jump at the chance to do these rides when the temps are in the 60s and 70s, which is why I did my ride this past weekend.  The temps and wind were in my favor.  My advice is that, if you plan to do something kind of crazy, check the weather report first!