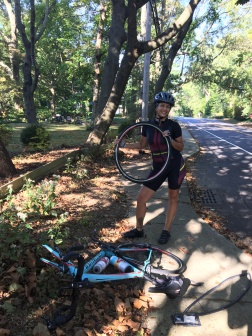 I don’t mind the ones that the tube must be changed but it’s those blowouts that I hate the absolute most.  They leave you stranded without a care but if it was just the tube all you would need is some air.

When it’s with a group it’s never when you could use a breather, but rather in the beginning or just after the break.  Why oh why must these things occur.  It’s such a drag, we all concur.

If you have gone for months with no incidents of flats, just know that streak of luck will be paid right back.  My group and I have just paid dearly, we had four flats in minutes.  That’s more than we should have had yearly!

Just know that, when you least suspect, that tire demon will be around to collect……