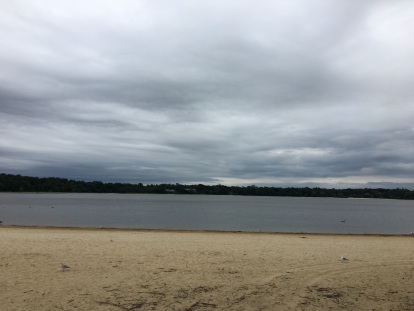 One of the guys we rode with at the club does a hilly ride to Lake Ronkonkoma at least once a year.  It’s a long but challenging ride.  It’s an all day event because there’s bathroom stops and a lunch stop.  At that time I didn’t know that rides weren’t supposed to take all day.  Another friend of mine rode with another club that rides in the morning but I didn’t think I was fast enough to ride with that group.  I knew there were young sexy cyclists on Long Island but I had no clue where they were and who they rode with.

I was getting ready for the ride when a young guy showed up at the lot.  I’d been riding with these guys for a couple years and I’ve never seen him before.  They all knew him and were very happy to see him.

We started riding and I was riding behind him while he was talking to one of the guys.  I joked around saying “You haven’t introduced me to your friend”. They didn’t realize that we’ve never met.  It was my responsibility to know who everyone on the ride was as I was the chairperson of my group.  We started taking and this guy was so funny.  I really enjoyed speaking with him.

Him and I rode together most of the ride.  We stopped to regroup a few times and chatted it up while we did.  He told me about the group he rides with, he said I should come.  I was reluctant to ride outside of my group, I never rode with anyone else before.  I was on call on Sundays until 11:00am so I only really had Saturdays.

We became friends on Facebook and he invited me to the ride he was leading the following Sunday.  I spoke with my employers and we agreed to change the way we do Sunday emergencies.  Instead of being on call in the morning we agreed that the cutoff for emergencies was Saturday night.  We’ve evolved even further in the past couple of years and we no longer have weekend hours.

I informed him on Saturday evening that I would attend his ride.  I was bringing another friend of ours from my club who didn’t want to do the remote start ride that my club was planning.

I showed up to their lot and there were many young people there.  This was where the young sexy people were!  The ride was fast paced and challenging but I managed to keep up with the group.  It was a great ride.  I rode strong through to the end.  Everyone was very nice and welcoming.  After the ride there were snacks and water being served that everyone was welcomed to have.

I showed up there to ride with them a few more times.  I really enjoyed these rides.  I returned in the spring and became an official member.  I passed on my responsibilities as the chairperson of my group to someone else and continued riding with them.  Although I also rode with other groups, I came back to the Mineola Bicycle Club every weekend.  It’s now my home club.

I recently received the high honor of being the first ever winner of the monthly club drawing!  There’s a new Loyalty Program.  Every ride is an entry into the drawing giving BrokeLadyCyclists an opportunity to win cool stuff.  I won an awesome Bike Care package of goodies to clean and lube my bike with as well as a new tube.  This is the perfect prize for me.  I take care of my bikes and they take care of me!