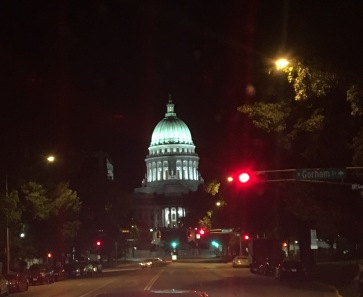 In late 2015 and early 2016 I started putting myself out there.  Prior to that I didn’t really put much effort into meeting “the one”.  There is an old saying that applied to my attitude towards men and dating.  The saying goes as follows: A man is like a meatball. The spaghetti in a bowl with some sauce is plenty of food.  When you add the meatball it adds flavor to the pasta.  Do you need the meatball? No, but it does make the pasta that much better.

I met someone online and we hit it off.  He lived in Wisconsin and worked for Trek Bicycle Corp.  He lived in a beautiful house on the lake.  These were all really nice things but I just wanted to meet someone I could get along with.  I was always a bit wary because dreams normally don’t come true for broke girls from Queens….. Things were going well so we decided to meet up. I flew to WI for Memorial Day weekend.

I flew in Friday after work so all was dark and quiet when I arrived. He had to pick a couple things up from work for our ride the next day, so we swung by the Trek building.  It was huge, they had just added onto the building to make their facility larger.  He gave me a brief tour of the facility. They had moulds for making carbon parts.  I didn’t realize that they did their manufacturing here in the U.S.  There were bicycles throughout the building that belonged to the employees, most of them bike to work.  It was like being transported to a magical land of bicycles.

When we got back to his place he knew I’d be hungry so he had a few snacks for me. The cheese was amazing as was the beer.  The beer was all brewed local.  I wish we could get those beers here in NY.  I’ve searched every shop selling craft beers but found nothing.

The next day we went for a ride.  His garage was filled with all sorts of bicycles.  I was sure I was in heaven.  I rode a carbon fiber bike for the very first time.  This bike was top notch. It was full carbon with aero wheels and Dura Ace components. It was only the second road bike I’ve ever ridden.  It was super light and fast.  Prior to that I had only worn low end cycling clothing so it was my first time wearing premium cycling apparel.  It felt amazing.  Everything about that trip was amazing.  Even getting caught in a torrential downpour wasn’t bad.  We rode the whole weekend long.  We even did a century.

It was beautiful over there. There was a lot of open farmland with beautiful wildflowers.  There were red barns and dairy farms. There were lakes and ponds. There were cows grazing.  The smells out there were intoxicating. The air smelled so fresh, crisp, and clean.  We did stop at a dairy farm for ice cream.  It was probably the best ice cream I’ve ever had!

I returned to Wisconsin two more holiday weekends after that.  One of the times I was there we went kayaking in the lake which was another first for me.  There were huge carp and all sorts of wildlife throughout the lake.  We rode Electra cruiser bikes through the neighborhood after kayaking while still wearing swimwear, it felt so free.  On July 4th a guy from the other side of the lake did an extravagant fireworks display.  We didn’t even have to go outside to see it as there were huge windows that looked out over the lake.

It really was like a fairy tale for me.  I got to experience a completely different life than the one I’m living.  He taught me how to be more pro.  He explained things to me in a way that I could understand. He showed me how to do some simple bicycle repairs and taught me how to change a flat.  He gave me advice that made me faster.  It didn’t work out between us but what I learned from him was well worth all the time I put into us.  All  in all I took a chance on love and came out a much improved cyclist.

I often joke around saying that I bought a Specialized because a Trekkie broke my heart but in reality I bought it because I got a great deal on it.  We spoke about different bike companies and he admitted that Specialized is an excellent bike company that makes excellent bikes.  They have a great business ethic and have excellent warranties.  You really can’t go wrong purchasing from either of the top two bicycle companies in America.

Wisconsin was absolutely beautiful and I would love to go back out there to do some more riding.  I would also like to stock up on beer while I’m out there.  If you get out to WI I highly recommend having the cheese curds.  They’re delicious!