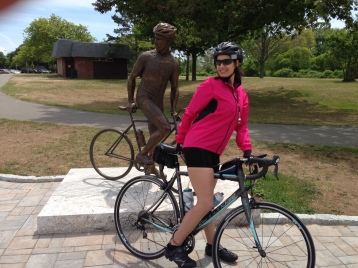 It was, technically, my first Memorial Day weekend on the road because the year before I attended a wedding in Florida and did no riding.  Neither The Senor nor I had any plans to travel. A few days prior to the weekend I called him up and demanded that he make plans with me. Although I was pushy and demanding I think he enjoyed my company and that’s why he put up with me.

The Señor is a genius when it comes to planning rides.  The plan was simple, or so we thought. We would park at the lot in Westbury and go to Seaford to eat at the awesome pizza place that I love so much.  After lunch we would ride across to CCP, take the Jones Beach bike path, and sit near the parking lot by the theater to take in the Air Show.

The show itself was amazing.  I had never seen an Air Show before. It must take a great deal of skill in order to be able to execute a well choreographed “dance” from a plane flying at high speed in the sky.  I was amazed at each and every performance.  I learned only recently that Long Island has an extensive history in aviation. We waited to see The Thunderbirds perform, which was the highlight of the show, before we got back on our way.

It was Sunday and we each had a couple of days of riding under our belts.  The way back from the Air Show we were an absolute mess.  We were tired and very sore.  Luckily the way back was fairly flat, we just had to deal with some wind.  We took turns pulling each other and shared snacks.

The last few miles of the ride we were obliterated.  We were pouring sweat, snot, and drool.  When we stopped at a light about 5 miles from the lot, I almost tipped over and had to catch myself.  By this time we were laughing at ourselves.  Somehow, someway, we made it back to the lot.  It was pretty late because we were out all day so we treated ourselves (or you can say he treated me) to a beer and a burger.

I believe The Señor did this ride with the group the following year.  I’m happy and honored to have been a part of the inaugural ride.  Besides freezing our butts off by the water for a couple of hours, it was a really nice ride/event.  Perhaps I’ll see what The Señor is up to this weekend…..