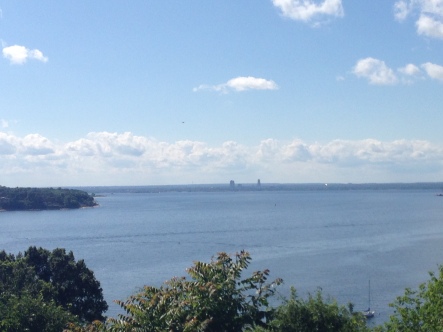 Everyone enjoys some good dirt, so I’ll tell you the story of my first bike romance.  It was with one of the guys I rode with at the club.  It all started out innocently.  We were flirting and then we started texting all the time.  Something felt kind of weird but I couldn’t quite place it….

There were holidays coming up that I would be off from work so I told him about it and we arranged to meet up for a ride.  It was my first ride date.  He said he’d put together a special route.  It was special all right.

When I showed up to our ride he put a Garmin mount on my bike and put his old Garmin on it without even asking me first! What if I didn’t want it? I was new to road cycling.  I had a road bike for all of two months.  Within the first 10 miles of the ride he took me up a steep climb and when we reached the top there was this gorgeous view.  He took my hands and kissed me.  It was nice but it didn’t feel quite right….

This ride must’ve gone on forever.  The ride was only about 35 or so miles but it felt like an eternity!  Climb after climb after climb.  This ride really wasn’t fun for me.  While climbing the steepest of the hills, I was miserable. I was hot and there was sweat pouring down my face.  I was climbing so slow that there were bugs buzzing all around me.  When I finally made it up there he was waiting there and he told me how proud he was of me. He told me that this hill was too tough for many of the people we ride with.  He said he knew I could do it.  This bastard brought me up to the steepest hill knowing it may be way too much for me but did anyway.  That really pissed me off!

I let all of it go. The thing that didn’t feel right was that he kissed me without really getting to know me, without asking me about my innermost thoughts.  I called him a couple mornings later and I told him I didn’t feel comfortable with things, that we should sit down to dinner. He told me that wasn’t possible, that he was married.  He said he thought I knew.

I may be broke but I have class and no married man will be grabbing my ass! I took that Garmin off my bike and gave it back to that married man.  I made it clear that cycling date we had would be the last of its kind.  He told me that he was falling for me. I told him “That’s just two tears in a bucket now, ain’t it?”.

We remained friends after that. I think deep down inside he respects me for being my own woman who is strong and proud.  Ladies, have respect for yourselves. No matter what your situation is, only do what you know is right…..